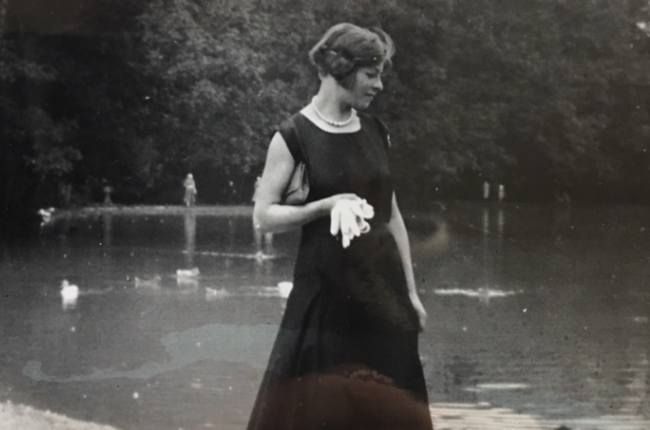 My grandma was my initial spark. When I was little, she often said to me: “You’re different from the rest of the family.” For years I didn’t know what she meant by that. She saw things in me even then that no one in my family had seen. Today I am sure that she was very gifted medially, as I am. She defended me, held her protective hand over me, and taught me more in death and after death than many other people. But at that time I did not know who I really was.

My grandmother’s name was Rosina. She was in the hospital and I was reluctant to visit her on Sunday because I was going on a business trip the next week. But I also knew that I would not see her again until the following Saturday. Actually, I had no time and no desire to visit her in the hospital, because my business trip already started on Sunday and I still wanted to have something of the weekend. But there was this urge in me to go to her.

I went to her hospital room and sat down on the chair by her bed. She looked into my eyes without a word. We both knew immediately that today we would see each other for the last time in this life. Without words. Then we started a conversation on two levels. On one level, we talked like grandma and granddaughter. A conversation like thousands of times in hospitals between grandmas and grandchildren: How are you? How’s the food? What does the doctor say? When are you coming home? And so on.

On another level, we said goodbye to each other without words, because words were not necessary there. Only feelings were important. How much I love her, that she is a great grandma, that I miss her, that her cookies are the best cookies I have ever eaten in my life. She, in turn made me understand that she loved me too, that I was different from the rest of the family and that she was proud of me. On the second level, there were only deep feelings, deep understanding and deep trust.

At that time, I didn’t understand what was happening between her and me and thought that I had imagined it. For quite a while, we talked this way until there was nothing left to talk about. I tried as hard as I could to delay our goodbye, but the ticking of the clock was a constant reminder of my business trip. I hugged her, turned for the door, and I waved one last time before I left. In my car, thick tears rolled down my cheeks. I couldn’t fully grasp what had happened. So, I switched to the mind mode and started my journey.“

On my business trip, the first two days were quite unspectacular. I checked with my mother to see how grandma was doing and did my job. The following morning changed everything in my life. I suddenly woke up at 6:27 a.m. in my hotel room without an alarm clock and saw my grandma standing ethereally at the foot of my bed. Kind of ethereal, but in her hospital pajamas. She said, “I have to go now and I want to say goodbye to you. I love you and we will meet again someday. Don’t be afraid.”

Full of panic, I called my then-husband and told him in shock that my grandma had just died, she was standing at the foot of my bed saying goodbye. He calmed me down and said that I had just had a bad dream. And if my grandma had died, my mom would have already called our house.

I was so angry at him for not believing me and at the same time so sad that I would not see her again in this world and I ended the phone call full of anger. For me there was no doubt about her death. Later he called me and told me that I had been right. She passed away exactly at 6:27 a.m. in the hospital.

The weeks and months after her death were difficult for me. I felt her all the time, smelled her and felt her. She was always right behind me, so I would turn around on the street to see if she was behind me. There was a feeling in me as if she was accompanying me and was always with me. I was so confused that I was convinced I was mentally ill. But then, miraculously, a book came to me in which a medium told about contact with deceased people.

This spiritual gift was apparently in me all along and became active with the death of my grandmother. At that point in my life, I was overwhelmed with the gift and the responsibility that comes with it and let it be overgrown by my mind. Not knowing and not suspecting what I should or could do with it in this life

It took me so many years to understand who I am: A midwife for adults. I help people ask themselves questions they might never ask themselves so they can courageously come out of their cocoons and carry the light-filled voice of their soul into this world. By doing what is their purpose and just being themselves.

That’s why I know with every cell in my body how hard it is not to be mainstream. When you have no confidence in yourself. To have no idea in which direction to go. And preferring to stagnate inside instead of opening up to what everything could be.

My spiritual helpers put it into perfect words to calm me down and let me find my way:

You will find within you …
Shadow and light.
Small and big.
Endings and beginnings.
Tears and laughter.
Depths and heights.
Past and future.
Doubt and trust.
Uncertainty and certainty.
Finitude and infinity.
…Until you realize that you are pure energy….

Are you ready to rediscover yourself?

Live at the moment →

You can find out more about which cookies we are using or switch them off in settings.

This website uses cookies so that we can provide you with the best user experience possible. Cookie information is stored in your browser and performs functions such as recognising you when you return to our website and helping our team to understand which sections of the website you find most interesting and useful.

Strictly Necessary Cookie should be enabled at all times so that we can save your preferences for cookie settings.

If you disable this cookie, we will not be able to save your preferences. This means that every time you visit this website you will need to enable or disable cookies again.